How Marijuana Laws are Always Changing in the US 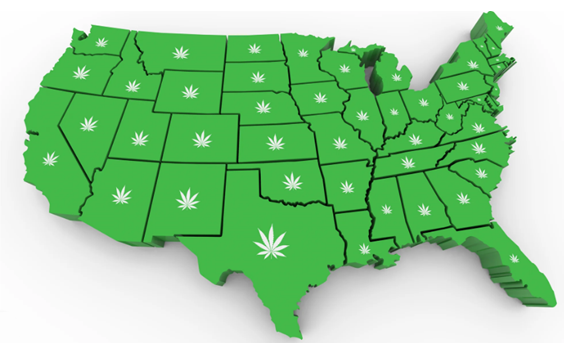 Marijuana laws have remained inconsistent across states and jurisdictions. It has also consistently conflicted with federal policy. Historically, the federal government classified marijuana under the Controlled Substances Act as a Schedule -I narcotic.

The US Food and Drug Administration recognizes substances in the Schedule-I classification as having no medical use. Therefore, they cannot be sold or prescribed legally to the public. Although marijuana remains an illegal substance on the federal level, the government currently has a hands-off approach to its use.

Each state is left to decide on the legality of the usage of marijuana within its border. The Department of Justice released guidance outlining specific prerequisites that will enable states to determine and implement medical or recreational use laws without federal government interference.

While this is a welcome development for cannabis users across the States, the absence of congressional consensus on the manufacturing, distribution, and sale of marijuana will likely continue to make marijuana a federal crime for years.

Key Highlights of the Ever-changing Marijuana Laws in the US

Over the past decades, the cannabis policy landscape has changed dramatically, with many states decriminalizing marijuana possession and exchange. Many states have also legalized the medical and recreational use of the substance. And thus the use of pipes has gone up dramatically.

However, marijuana remains a prohibited substance under federal law. Interestingly, the cannabis industry is cashing out in many states because of the disconnect between state and federal law. The absence of consistent regulation is also making the industry flourish across the country.

The growth, distribution, sale, and usage of cannabis in the United States remain a federal crime across all states, including states with established medical and/or recreational marijuana laws.

In states where the possession of marijuana by certain individuals is legal, the federal government has the right to enforce federal drug laws against such individuals within the same state.

That means compliance with a state’s medical marijuana provisions does not count as a defense in a federal prosecution. States can choose not to enforce criminal laws against individuals who use or sell marijuana for medical or recreational purposes. They can also ignore the federal law they disagree with but cannot wholly legalize marijuana.

Between 1969 and 2019, there was significant growth in public support for the legalization of the use of marijuana in the United States, from 12% to a whopping 66%. States have also taken the initiative to liberalize their outlooks on marijuana markets.

Early in the 20th century, States started banning the cultivation, sale, and possession of marijuana. As of 1937, all states had at least one form of marijuana legislation based on concerns that cannabis substances could motivate crime, lead to insanity, and become psychologically addictive.

It is worth stating that while liberalization policies mostly replaced the ban, Idaho and Kansas still prohibit marijuana in all forms. These states also attach criminal penalties to the distribution and possession of the substance.

Ten states allow the use of high-CBD and low-THC products but still maintain the prohibitions with criminal penalties attached to all forms of marijuana activities.

This refers to the annulment of criminal penalties associated with marijuana possession for casual exchange and personal use. Other policies and approaches have surfaced. One of them is the De-penalization policy. This is different from decriminalization.

De-penalization only reduces the penalties associated with marijuana possession and not outright removal of the penalization. There is also the non-enforcement policy where the enforcement of low-level marijuana-involved crimes is de-prioritized.

Many states in the United States have adopted this policy. Decriminalization is not the same as legalization because it still bans the cultivation, distribution, and possession of cannabis and criminally penalizes offenders.

Medical marijuana laws permit certain patients with “eligible health conditions” to purchase marijuana at dispensaries in the state. Buying the substance requires that the patient holds a prescription from a certified medical professional.

The common qualifying health condition allowed to buy medical marijuana is chronic pain. Some states also regularly add other conditions to the list. Currently, thirty-six states and four territories in the United States have approved medical marijuana use.

These laws eliminate the civil and criminal penalties associated with the distribution and possession of marijuana by individuals aged 21 and older. The recreational marijuana laws allow residents to grow 4-6 marijuana plants and restrict purchase and possession to a maximum of two ounces.

These laws also impose a minimum of 10% retail excise sale tax on the substance. It is worth stating that several states with recreational laws ban cannabis use while operating a vehicle.

Recreational marijuana legalization is relatively new, with Washington and Colorado being the first two jurisdictions to allow possession and cultivation of marijuana in 2012. By 2020, Washington D.C and fifteen other states established laws legalizing the supply and possession of cannabis by adults.

States in the United States have choices in recreational cannabis legalization. Many states have adopted a commercial model that allows private industry to cultivate and sell marijuana subject to laws at the state level. With limited marijuana regulations at the national level, there is a continuous division between state and national policy.

While more states are embracing the recreational use of cannabis, the laws will certainly experience more changes that will further define the legalization status of cultivation, distribution, and possession of marijuana across states and federal levels.