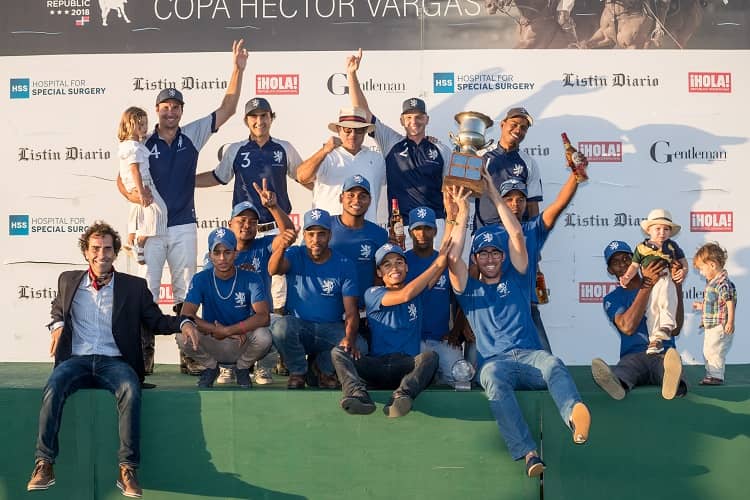 After years of hard training, Monterosso takes home its first cup in the Polo Challenge and is delivered by the hands of the daughters of the renown Polo player Héctor Vargas.

Casa de Campo finished with great success the first Cup of the third season of Polo Challenge 2018. The Italian skipper team Alessandro Bazzoni surprised everyone by defeating the undefeated Lechuza 12 goals by 5 in the Héctor Vargas Cup Final and getting the cup for his team in a very emotional game in which the daughters of the great Héctor Vargas delivered the first cup to the Monterosso team and were honored with a memorial for her father.

The 2018 Polo Challenge season will last for three months and four cups will be held, the first being Héctor Vargas; then the Bronze Cup, from February 3 to 17; then the Silver Cup, from February 24 to March 10; and finally, the Gold Cup, from March 15 to 31. This challenge is widely recognized as one of the most important in the Polo world and its victory provides a different level for the winner team.

On court No. 2 of the Resort, Monterosso and Lechuza met as a revenge; Alessandro Bazzoni came out victorious, with the renowned Toccalino brothers, the team widely defeated Lechuza’s team.

The game was exciting since big Polo names matched each other for the final cup. That gave the public a very interesting evening in which they enjoyed of talent and ambition combined into one goal: winning the cup.

For the subsidiary Agualinda beat Casa de Campo, 9 to 7

The judges in this 2018 season were the Argentine professionals, Messrs. Federico Martelli, Gastón Dorignac (h) and Esteban Ferrari.

Those present enjoyed a spectacular afternoon of Polo, beginning with the national honor performed by Juleici Yan Franzua from the Fundación MIR and winner of AVERO. At the end of the match, an emotional tribute was made to the remembered dominated polo player Hector Vargas; Alfonso Panigua and Tony Rivera spoke beautiful words in tribute to the renowned polo player who remained in the sport for 30 years, becoming a national pride and a reference in the Polo world. This moment was emotional for everybody and showed huge respect for the late Polo Player.

The honor of delivering the trophies to the winners was in charged of Evelyn and Dilenia Vargas, daughters of Héctor who were present at the event and represented one of the best Polo players of all times.

The narration of the game was in charge of Dr. Fernando Arata, Equestrian Director of Casa de Campo and Director of the Polo Challenge, who gave us tension and emotions with its words.