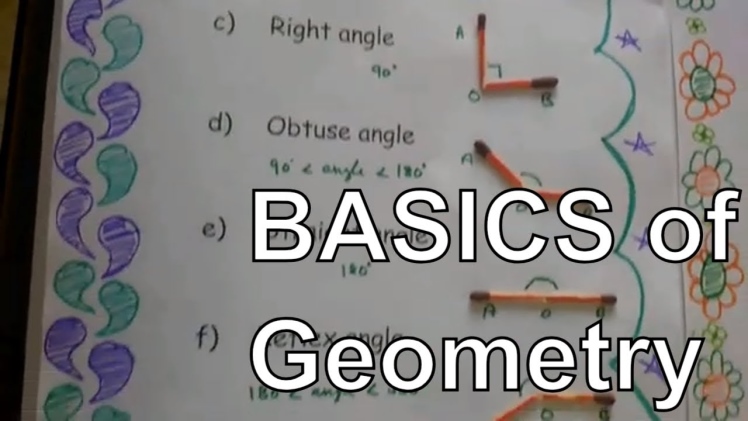 Mathematics is a vast and diverse field, and it has a massive scope in our life such as science, engineering, finance, medicine and so on. Mathematics is an important subject, and we are all surrounded by the world of mathematics. Maths is a subject of numbers, shapes, measurements, logical activities, data handling, etc. The concepts and the theories explained in Mathematics help to solve different types of academic problems and real-life problems. Learning Mathematics helps to improve our logical thinking and problem-solving skills. The various branches of mathematics such as arithmetic, geometry, trigonometry, algebra, etc., lead to the technological development of our country. Here, let us discuss one of the branches called “Geometry” and its basics in detail.

The term “Geometry” is derived from the Greek word “Geometron”. It is made up of two words, such as “Geo” and “Metron”, which means “Earth” and “Measurements”, respectively. Basic geometry is the study of points, lines such as parallel lines and intersecting lines, angles such as acute angle, obtuse angle and right angle, plane figures and solid figures.

A point is defined as the location in space. It is generally referred to by dot (.). A point on the surface is usually expressed in the upper case letter.

We know that a ray is the collection of points that starts at one point (endpoint) and extends infinitely in one direction. An angle is a measurement between two rays that joins together at the common point. The notation to represent the angle is “∠”. The three most common types of angles we have learned are acute angle, obtuse angle and right angle.

Right angle: The angle which is equal to 90°.

A line is defined as a collection of points that extends infinitely in both directions. The two arrows on both sides of the lines represent that the line extends forever. The part of the line is called the line segment. A line segment has two endpoints, whereas a line has no endpoint. The line that never meets each other even if we extend them on the plane surface is called parallel lines and the distance between the two parallel lines is constant. The line that meets each other after extending them are called intersecting lines, and the point where two lines intersect is called point of intersection. The perpendicular lines are the lines where two lines meet each other at right angles.

Solid figures, also known as three-dimensional figures or 3D shapes, have three dimensions: length, breadth, and height. Generally, 3D shapes are obtained from the rotation of 2D shapes. Some of the examples of solid figures are cuboid, cube, cylinder and so on.

How to Balance Your Studies With Caring for a Loved One