Error and Exceptions Handling in Python 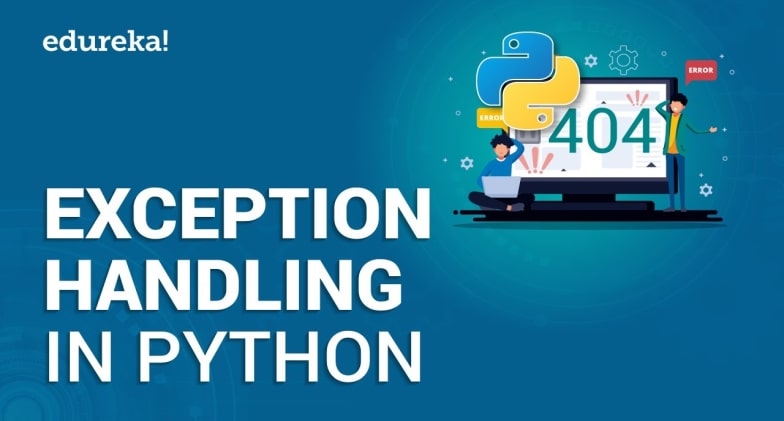 If you use Python language, then it is imperative to understand error and exceptions handling. Error handling helps to increase the codes’ robustness. It guards the code against any potential failure which could end up terminating the program in an uncontrolled way.

Errors and Exceptions – The difference

So suppose you write a code that has been deployed in production, but it terminates because of an exception. No client would appreciate it. It is thus important that you handle the exception in advance and avoid any unwanted chaos.

There are various kinds of errors and let us discuss them in detail.

Syntax errors are also known as parsing errors. These are caused because the parser finds a syntactic problem in the code. The parser runs into an error while it is busy executing the code. It is the token that precedes the error which causes failure. Python can rectify the fundamental error. To let you see where the error was detected, Python tells you the name of the file along with the number of the line. This makes it easy for you to check and rectify the code.

The Out-Of-Memory errors usually are dependent on the RAM of your system and are related to Heap. If your code has large objects or many referenced objects in its memory, you will see the out-of-memory error. This can happen because of several reasons.

You will be able to take care of the memory errors using exception handling. This is a fallback exception where the interpreter runs entirely out of memory, and thus the current execution should immediately come to a stop. This is when Python throws an out-of-memory error letting the script catch itself and break out of the out-of-the-memory error and thus recover itself.

But because Python uses the memory management architecture used by the C language, there is no certainty that all the scripts will recover. At times the memory error command causes an unrecoverable crash. Thus using exception handling to deal with such kinds of errors is best avoided.

Recursion error is related to stack and happens when you use the call function. Recursion error occurs when there are many methods, each inside of the other, that get executed. One is with an immeasurable recursion and is limited to the stack size.

The stack frame is populated with method data for each call, but it is not free. This means that it calls itself in an infinite loop method call. You will then see a recursion or a Stackoverflow error. In order to reproduce this error, a recurrent function is defined, which will be recursive.

The indentation error is similar to the syntax error. However, it is only specific to the issues in the script that is indentation-related.

Want to learn more about Python error and exception handling? Then enroll in the best data science courses online.

Even when the syntax in any expression or statement is correct, it could cause an error when it is executed. The Python exceptions are those errors that get detected during the execution, and these are not fatal. The exception object gets created when the Python script raises an exception. In case the script is not able to handle this exception, then the program will terminate abruptly.

The program will mostly not handle the exceptions, which let it throw an error message.

The exception error is printed as a message like a type error and the zero division error. Both of these are in-built exceptions.

The remaining part of the lines will be detailed with reasons that caused the error.

The KeyboardInterrupt exception flashes when the program tries to stop from running. It may also happen by mistake. In this case, using the exception handling to avoid the issue can be of use.

The standard errors in programming are Arithmetic Error,  OverFlow Error, Zero Division Error, and Floating Point Error. All these fall in the arithmetic base class and are exception errors raised in handling arithmetic operations.

The two kinds of exceptions raised are index error and key error.

You learn all of these and much more in the course Masters in Data Science in India.