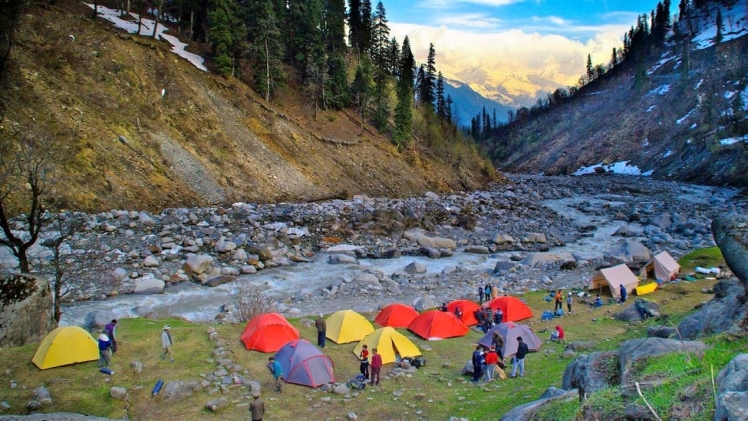 Earlier this year, my friends and I were itching to go on a trek. We’ve trekked together plenty of times in the hills of South India, but never in Himalaya before. This year, we decided to change that. In February this year, we decided to go trekking in the Himalayas. We were looking for a suitable trek that wouldn’t be too difficult for us, and some Thrillophilia Trustpilot reviews led us to the Beas Kund trekking package. We did a fair bit of research and decided that the difficulty of the Beas Kund trek suited us perfectly. The 4 day trek started from Manali, so we arrived a day early. On the scheduled date, we met with our tour guide and the rest of the trekking group at a designated meeting spot in Old Manali. The actual trek was preceded by a number of interesting activities. On the first day, we hiked to the Jogini waterfalls. The 1.5 hour long walk was an easy and scenic one, and made for a fitting warm up for the bigger trek to follow. We were back at the camp in no time. Our campsite itself was a happening place; set right by the river, a number of activities were arranged for us here, such as rappelling and river crossing. I’ve never tried either of the sports before, and had quite the time trying to learn the ropes- quite literally! – of rappelling. Snacks and tea were arranged for us at camp in the evening, and following snacks, my friends and I decided to venture out for a little bit to explore old Manali on foot. At night, a bonfire session with music was arranged at camp, which made for a great bonding session within the group. The next morning, we woke up early and refreshed ourselves for the trek. A vehicle was arranged to take the group to Solang Valley, wherein started our journey towards Beas Kund. The first leg of the trek spanned between Solang and Dhundi. We made our way through the striking green grass of Solang. The Beas River flowed along our tracks, flanked by flowering trees on both sides. The daunting Hanuman Tibba, majestic with its snow clad top, rose at a distance, and formed the fitting backdrop to the beautiful view that was before us. The grasslands opened into thick forests of oak, and after a quick walk across it, we reached the campsite at Dhundi. That night, we set up camp at Dhundi and had an early night. The next day, we embarked on the main Beas Trek trail. The first leg cut through the sides of the mountain to reach Bhakarthatch. The first half was undeniably the most difficult, with a steep climb and turns. However, albeit tough, it was nothing undoable and we conquered it easily despite our limited expertise. Several viewpoints were scattered across the trail, and we stopped at each one to enjoy the resplendent views of the valleys that spread below. After a four hour long trek we finally reached our prized destination. Beas Kund is a little alpine lake right at the very heart of the mountains. A striking emerald blue in color, the lake appeared magical against the backdrop of the bright green mountains that surrounded it. At a height of over 3,500 feet above ground, we also caught a glimpse of the many peaks around Manali- Friendship Peak, Shitidhar, Ladakhi, and Hanuman Tibba. The lake is the spot where numerous streams gather to empty themselves, and remains crystal clear at all times. We spent some time by the lake, taking pictures and just taking in the view. After an hour and a half, we started our descent back to camp. The next day marked our return down the same route that we had arrived. We made our way to Solang from Dhundi, then travelled back to Manali by taxi. Our first trip to the Himalayas had proved to be a splendid one indeed. As the Thrillophilia Mamma reviews had claimed, the tour was spent without any hassle. Everything during the trek was arranged on our behalf, including the camping equipment, the travel arrangements and our meals. Both the campsites that we stayed at were clean, well maintained and well organized, which meant that everything ran smoothly and we never needed a lot of assistance. We were accompanied by an accomplished tour guide as well, who was always ready to help us. Overall, my first Beas Kund trek ended up being a magical experience, and I’d definitely put in a word for this tour to anyone who’s interested in trekking the Himalayas!